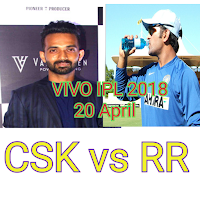 CSK vs RR match being played in Maharashtra Cricket Association Stadium Pune on 20 April 2018. This is 17th match of IPL 2018. Let’s start the arrengment of players in both teams.