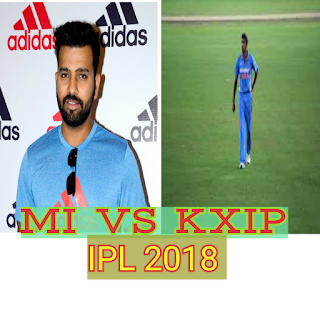 MI vs KXIP match will be played in Holkar Cricket Stadium Indore at 8pm on 04 May 2018.
KXIP is a good balanced team . After joining Chris Gyle this team became extra strong. this team is at 4th position in point table. But against SRH given weak performance in which couldn’t achieve wining target that was only 133 and lost the match. Although this team is a well balanced team and able to defeat any other team in IPL 2018.
MI on other hand reached to the condition similar IPL 2014 in which after 8 matches with 2 wins and 4 points this team was on below from all other teams in  point table. There are same condition in 2018 , 8 matches ,2 wins 4 point and stayed down to all other teams in point table. In 2014 MI won the trophy and made a history. If Rohit Sharma comes in form regular then this team may defeat oll other teams and can repeat history 2014.
Probable playing XI of KXIP
KL Rahul, Chris Gyle, Mayank Agrawal, Manoj Tiwary, Karun Nayer, Dewid Millar, R Aswin, Andrew Tye, Mohit Sharma, Ankit Rajpoot and Mujeeb Ur Rahman
Probable playing XI of MI
Suryakumar Yadav, Kiron Polard, Rohit Sharma, Ishan Kishan J P Duminy, Krunal Pandya , Hardik Pandya, Ben Cutting, Jaspreet Bumrah, Mayank Markandey, Mitchell McCleanaghan.
Match will be very interesting I will
updated you ones match will start.
So be stay with my blog

Mumbai Indians won the toss and elected to bowl first.

Chris Gyle and KL Rahul started the inning of KXIP. KL Rahul[24 of 20], Chris Gyle[50 of 40] and Marcus Stonis[29 of 15], played agressive and blasting. Karun Nayer[23 of 12] also played good inning. But other players such as Yuwraj Singh[14], Axer Patel [13] and Mayank Agrawal[11] played average inning . KXIP scored 174/6 in 20 overs. Mitchel Mc Clenaghan, Jaspreet Bumrah, Mayank Markandey and Hardik Pandya got 1-1 wicket .
MI inning
Even Lewis and Suryakumar yadav started the inning. Suryakumar Yadav played very good inning of 57 in just of 42 delivery in which he smashed 6 4s and 3 6s. Ishan Kishan[25], Hardik Pandya[23] and Even Lewis scored only 10 runs. After 17 overs still bating at17 and Krunal Pandya at 5 runs. Kunal Pandya played great inning of 31 of 12 delivery in which he smashed 4 4s and 2 6s and MI won the match by 6 wickets
Post Views: 2