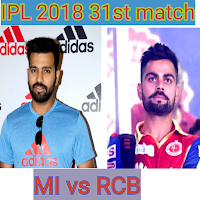 31st match of IPL2018 will be played between RCB and MI at M Chinnaswamy Stadium Bengaluru on 1st may 2018. one match had been played between two on 17 April 2018 In that match MI was the winner.

Both teams are in the same condition in accordance to point table. RCB and MI both teams have won only two matches each. So this match will do or die to match because the chance to go in top 4 will decrease hardly for that team who will lose the match.

On other hands, Rohit Sharma played a good inning in only 2 matches in which MI was the winner. So Rohit Sharma will have to play a long and blasting inning to win the match.

Fielding is the main factor for both the teams because it looks very lose fielding spacially of RCB. So it is too important to improve it to be the winner.

They have played 22 matches in which MI have won 14 and in M Chinnaswamy Stadium RCB have won only one match out of 8. This record says MI is better than RCB.

If AB de Villiers couldn’t recover from illness than Manan Vohra will take place at that position.

MI won the toss and elected to bowl first