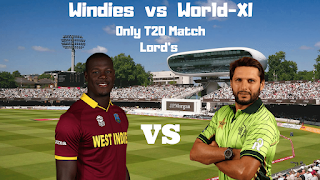 West Indies vs ICC World XI T20 match has been played in Lords. In this very interesting match West Indies proved his power in T20 format. West Indies scored 199 for the loss of 4 wickets batting first but ICC World XI couldn’t achieve this target and all-out at only 127 runs . So ICC World XI lost this match by 72 runs.

Only 4 batsman crossed double figure in which Parera played a great and blasting inning of 61 faced only 37 delivery in which he struck 7 4s and 3 6s. S Malik 12, S Afridi 11 and McCleanaghan scored only 10 runs. Rest of the World XI’s batsman couldn’t do good for team. World XI’s team all-out at only 127 and lost the match by 72 runs. K Williams got 3 wickets. Badree and Russell got 2-2 wickets. Brathwait and Paul got 1-1 wicket . Great performance of these bowlers stopped ICC World XI at 127 and won the match by 72 runs.
Thanks to visit my blog. I will wait for your comments.