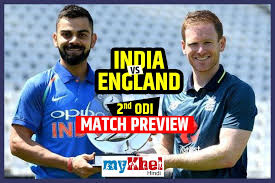 India vs England 2nd ODI match of India tour of England Series 2018 being played in Lord’s London, on 14th July 2018. In this India vs England 2nd ODI match, India is on fire and on the stage to win this ODI series also. India has won the first ODI against England by 8 wickets, in which match Kuldeep Yadav and Rohit Sharma played an amazing and unforgettable inning. England scored 322/7 in 50 overs but India could score only 236/10 in 50 overs and lost the match by 86 runs.

Team News
India
India is in a good position in this match with a 1-0 lead in series of 3 ODI’s. All players of the Indian team is in good form. But Bhubaneswar Kumar unavailable in this match also due to fitness problem, although Indian team is now looking very strong and the combination of players is fantastic and trustworthy.
England
England is now not in a good position. After losing T20 series they won’t want to lose this ODI series, So England is in the position of ‘Do or Die’. Alex Hales not available to play is bad news for England. Substitute of Hales, Ben Stocks is not in a good form. This India vs England 2nd ODI is a tough exam for England in which they must need to pass to remain in series.

England won the toss and opt to bat first.

Jason Roy and Jonny Bairstow started the inning for England. they played good inning but Joy Root of England played an amazing inning of 113 off 116 with 8 4s and 1 6s and achieved team score a good total. England scored 322/7 in 50 overs in which Eoin Morgan 53, Devid Willy 50, Jason Roy 40, Jonny Bairstow 38 and Moen Ali supported with 13 runs. Dewid Willy played blasting inning and got his half-century in 31 delivery in which he smashed 5 4s and 1 6s.
Kuldeep Yadav got 3 wickets in his 10 overs spell off 68 runs. Umesh Yadav, Hardik Pandya, and Yajuwendra Chahal got the 1-1 wicket. this India vs England 2nd ODI match will be remembered for Joy Root’s century.

As usual, Rohit Sharma and Shikhar Dhawan started the inning for India. Rohit Sharma today played very slow and given his wicket to Mark Wood. He scored only 15 off 26, Dewid Willy got the wicket of Shikhar Dhawan who scored 36 off 30 with 6 4s. K L Rahul lost his wicket without scoring. Virat Kohli played a good inning for India. He scored 45 runs. Suresh Raina also played a good inning of 46 runs but these scores were not enough to aceive the winning target, 323 runs. India could score only 236/10 in 50 overs. England won this India vs England 2nd ODI Cricket match by 86 runs and equalled the series by 1-1,