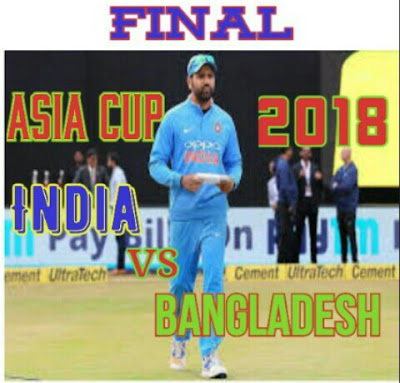 Hi, friends I am Gyan Ranjan. In this blog post, I will discuss the final cricket match of Asia Cup 2018 IND vs BAN. Here you will get Preview, Prediction, live cricket score and the full highlight of this match

Preview
India won all the league and Super Four matches except one tie against Afghanistan.
Bangladesh lost 1 match in Super Four against India but did a great performance in other matches and defeats Afghanistan and Pakistan. Bangladesh is also in a good position so Thrill of Cricket may repeat of last final match in this IND vs BAN final of Asia Cup 2018

Prediction
After looking performance of both, the teams in this Asia Cup, India looks stronger than Bangladesh and has more chance to win this IND vs BAN final of Asia Cup 2018

Toss
India won the toss and opt to bowl first

Bangladesh Inning
Liton Das and Mehidy Hasan started the inning for Bangladesh and did 120 runs partnership for 1st wicket which was the highest runs partnership for Bangladesh for the first wicket against India. Liton Das made his first ODI century in this Asia Cup 2018 final IND vs BAN match. He scored 121 off 117 delivery with the help of 12 4s and 2 6s. Mehidy Hasan also played an inning of 33 runs and Soumya Sarkar scored 33 runs. But other batsmen of Bangladesh totally failed and Bangladesh could score only 222/10 in 48.3 overs.
Kedar Jadhav breaks the partnership of 1st wicket and after that Bangladesh lost his wickets in regular intervals. Kuldeep Yadav got a maximum of 3 wickets in this match. Kedar Jadhav 2, Jaspreet Bumrah and Yajuvendra Chahal got the 1-1 wicket. Bangladesh lost his 3 important wickets as a result of run-out. Bangladesh 222/10 in 48.3 overs.

India inning
India got the winning target in the last bowl of the match for the loss of 7 wickets. So India won this very interesting match of Asia Cup final by 3 wickets.
Rohit Sharma and Shikhar Dhawan started the inning for India. Both the players are on fire from the beginning of the match but in 5th over when the score was 35 Shikhar Dhawan 15, lost his wicket. After adding a few runs at the score of 42, India lost his 2nd wicket that was the wicket of Ambati Raydu who could score only 2 runs. Rohit Sharma and Dinesh Kartik established the inning and reached the score to 83. But Rohit Sharma who scored 48 runs, lost his wicket at this score c by Najmul and bold by Rubail. Rohit Sharma smashed 3 4s and 3 6s in his inning of 48. MS Dhoni 36, and Dinesh Kartik 37 did a valuable partnership of 54 runs and reached the team score to 137 when Kartik lost his wicket. Kedar Jadhav came to play and did some useful runs but escaped out from the field due to a leg injury. Bhubaneswar Kumar 21 and Ravindra Jadeja established the inning, reached it to 212 when Ravindra Jadeja lost his wicket and just after adding 2 runs India lost the wicket of Bhubaneswar Kumar when the score was 214 in 48.1th over. Injured Kedar Jadhav came to play again. Kuldeep Yadav and Kedar Jadhav were on the crease. 9 run needed in 11 delivery but India could get only 3 runs in that 2nd last over of the match. Now India was on last over when 6 needed in 6 delivery. Both the players scored 4 runs in 1st 4 delivery. Now needed 2 runs in 2 delivery. Kuldeep Yadav played 2nd last bowl for 1 run. Now India needed 1 run in 1 delivery and Kedar Jadhav was on the strick. Heart of followers of both the teams was on a thrilling stage. Kedar Jadhav did this thrilling moment on his name, got 1 run on that last delivery and did India the winner of Asia Cup 2018. India scored 223/7 in 50 overs and won this Asia Cup 2018 final, IND vs BAN match by 3 wickets.
Mustfizur Rahman and Rubail Hussain got the 2-2 wickets, Najmul, Mahmudullah, and captain Mashrafe Mortaza got the 1-1 wicket but couldn’t stop India to get the winning target 223/7