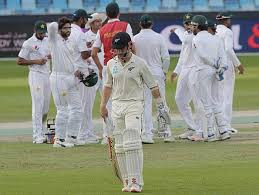 PAK vs NZ 2nd test 2018 being played in Dubai International Cricket Stadium, Dubai from 24 Nov to 28 Nov 2018. In this match, the players of Pakistan performed best in both section bowling and batting.

Hi friends, I’m Gyan Ranjan. This is the blog post in which you will get the description of memorable moments and live cricket score of PAK vs NZ 2nd test 2018.

Pakistan won the toss and opt to bat first.

The batsmen of Pakistan performed best in this Pakistan vs New Zealand 2nd test 2018. They have given a good start to the Pakistan national cricket team. Pakistan builds a big total and declared when the score was 418/5. Harish Sohail did the highest individual score in this match. He scored 147 runs with the help of 13 boundaries. Babar Azam remained not-out after making 127 runs. He smashed 12 boundaries and 2 sixes in his inning of 127 runs. Azhar Ali also supported with 81 runs to build a big total 418/5.  Colin de Grandhome got 2 wickets. While Trent Bolt and Ajaz Patel got the 1-1 wicket in this PAK vs NZ 2nd test 2018.

Yasir Shah of Pakistan didn’t allow New Zealand’s batsmen to score good runs. He got 8 wickets in this inning after giving only 41 runs. Only 3 batsmen could score in double figure. Jeet Raval 31, Tom Latham 22, and Kene Williamson scored 28 runs in this inning. New Zealand all-out at a little score 90 runs due to the best bowling performance of Yasir Shah. New Zealand realizes that his batsmen failed to play Yasir Shah. Pakistan forced New Zealand to play follow-on. New Zealand trail by 328 runs on the basis of the 1st inning scores

The highest scorer of New Zealand’s 1st inning, Jeet Raval failed to play. He could score only 2 runs in this inning. Ross Taylor played a great inning of 82 runs. He smashed 7 boundaries and a six in his inning. Kene Williamson 30 and Tom Latham supported with 50 runs. New Zealand struggling to chase trial runs first in the 4th day. Pakistan is on the way to win by an inning and runs in this Pakistan vs New Zealand 2nd test match. New Zealand was all-out at 312 runs. Pakistan won by an inning and 16 runs