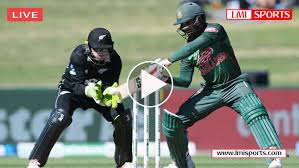 Read and watch 2nd ODI Bangladesh vs New Zealand live cricket highlight. This 2nd ODI of Bangladesh tour of New Zealand 2019 has been played at Hagley, Oval Christchurch on 16 Feb 2019.

Hi friends, I’m Gyan Ranjan. In this post, you can read and watch the 2nd ODI Bangladesh vs New Zealand live cricket score and highlight.

New Zealand won the toss and opt to bowl first.

Bangladesh failed again to build a big total in this 2nd ODI. Only Mohammad Mithun performed well as had done in the 1st ODI. He played an inning of 57 runs. He smashed 7 boundaries and 1 six in his inning. Sabbir Rahman 43, Mushfiqur Rahim 24 and Soumya Sarkar supported with 22 runs. But Bangladesh all-out in 50th over at 226 runs. Lokie Ferguson got 3 wickets. Todd Ashle and James Neesham got the 2-2 wickets. The other three bowlers got 1 wicket each. Bangladesh scored 226/10 in 2nd ODI Bangladesh vs New Zealand 2019.

When Martin Guptill is in form then everything is easy for New Zealand. Martin Guptill got another century in the 2nd ODI as had don in the 1st ODI. He scored 118 runs in just of 88 delivery. He smashed 14 boundaries and 4 sixes in his inning. Mustfizur was only the bowler who got wickets for Bangladesh. He got 2 wickets in this 2nd ODI cricket match. Kene Williamson well supported with 65 runs and reached New Zealand to 2nd win of this series. New Zealand scored 229/2 in36.1 overs and won this match by 8 wickets.