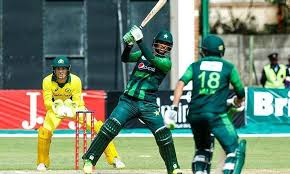 Pak vs Aus 1st ODI 2019 of Pakistan and Australia in UAE 2019 series has been played in Sharjah Cricket Association Stadium Sharjah on 22 March 2019. Get Pakistan vs Australia 1st ODI 2019 highlights and live cricket score.

The confidence level of the Australia national cricket team is high. He has had won both, the T20 series and the ODI  series against India before this tour. On the other hand, the Pakistan national cricket team is also in good form. So matches of this series will be interesting. All the teams are preparing them for world cup 2019. That’s why many crickets series have played. India tour of Australia, India tour of New Zealand, Sri Lanka tour of Australia, Pakistan tour of South Africa, England tour of West Indies 2019, Bangladesh tour of New Zealand,  Sri Lanka tour of South Africa and Australia tour of India. Some players of Australia are absent from IPL 2019 League due to Pak vs Aus ODI series 2019

Pakistan won the toss and opt to bat first

Pakistan started the inning to build a big score. But lost the 1st wicket in 9th over when the score of Pakistan was only 35 runs. That was the wicket of Imam-ul Haq. He could score only 17 runs with the help of a boundary and a six. Shan Masood played well and supported with 40 runs before losing his wicket. Haris Sohail and Umar Akmal did a great partnership of 98 runs for Pakistan. Umar Akmal supported the team with valuable 48 runs in this Pak vs Aus 1st ODI 2019.

The captain of Australia Aron Finch played a great inning of 116 runs. He smashed 8 boundaries and 4 sixes in his inning. He did a long partnership of 172 runs for the 2nd wicket with Shaun Marsh. And made this match easy to win for Australia. Mohammad Abbas and Faheem Ashraf got the 1-1 wicket in this Pak vs Aus 1st ODI 2019. Shaun Marsh also played well and achieved his team to the winning target. He scored 91 runs. This match was very interesting. Because the match was decided in the 2nd last over of the inning. Australia scored 281/2 in 49 over and won Pak vs Aus 1st ODI 2019 by 8 wickets