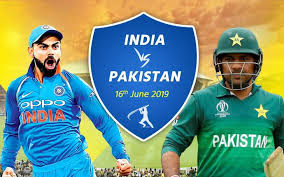 India has had won all previous 6 matches against Pakistan. Watch and Know all about this Ind vs Pak CWC 2019 match.

You can watch interesting moments and Ind vs Pak World Cup 2019 highlights after the match.

India hasn’t lost any match against Pakistan after a defeat in Champions Trophy.

But Pakistan was defeated by India in Asia Cup.

6 matches had been played between India and Pakistan in ICC Cricket World Cup.

India has had won all the previous 6 matches against Pakistan.

India is on the way to get the 7th continuous win against Pakistan by winning this India vs Pak World Cup 2019 match.

A match against New Zealand suspended due to rain.

Pakistan has won a match against a strong team in England in this ICC Cricket World Cup 2019.

So this match will be very interesting and a crucial battle of the Cricket World Cup 2019.

Shikhar Dhawan who had gotten a century in Ind vs Aus WC 19 couldn’t play in this match due to an injury.

KL Rahul and Rohit Sharma started the inning for India.

Vijay Shankar got a chance to play in absence of Shikhar Dhawan.

Pitch report for India vs Pak World Cup 2019 is good but the weather report is suspicious. It is possible to rain during the match.

He broke the record of Sachin Tendulkar who had scored 11000 ODI runs in 276 matches.

Virat Kohli got his 51st ODI half-century in this India vs Pak World Cup 2019.

Rohit Sharma played an inning of a century 2nd time in this CWC 2019.

Pakistan won the toss and opted to bowl first.

KL Rahul and Rohit Sharma started the inning for India. India scored 336/5 in 50 overs. Rohit Sharma played a great inning of 140 runs. He smashed 14 boundaries and 3 sixes in his inning of 140 off 113. Rohit Sharma and KL Rahul did a great partnership of 136 runs for the 1st wicket. Virat Kohli 77, KL Rahul 57 and Hardik Pandya well supported with 26 runs. Mohammad Amir got 3 important wickets in this India vs Pak World Cup 2019.

Pakistan lost his 1st wicket when the total score was only 13 runs. That was the wicket of Imam-ul-Haq. But Fakhar Zaman and Babar Azam did a great partnership of 104 runs for the 2nd wicket. Fakhar Zaman 62 and Babar Azam scored 48 runs. Pakistan lost 4 wickets in scoring only 12 runs. Pakistan lost his 2nd wicket at 117 and 5th wicket at 129 runs. Match stopped due to rain when Pakistan was at 166/6 in 35 overs. At this time, Pakistan was 86 runs behind the winning target according to the DLS method. The match was started but stopped again when Pakistan was at 212/6 in 40 overs. The match was decided by the DLS method. India won this India vs Pak World Cup 2019 match by 89 runs. Vijay Shankar, Hardik Pandya, and Kuldeep Yadav contributed the 2-2 wickets between them.