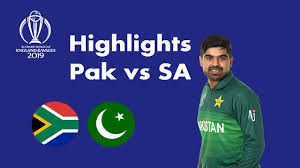 Friends, In this post, I’ll discuss the probability of Pak to qualify for the semi-final. Watch Pak vs SA ICC Cricket World Cup 2019 highlights. Know live cricket score and performance of both the teams in this SA v Pak WC 2019 match.

Pakistan elected to bat first after winning the toss. Imam-ul-Haq and Fakhar Zaman started the inning and did 81 runs partnership for the 1st wicket. Both the players scored the 44-44 runs.

Lungi Ngidi got 3 wickets in this Pak vs SA ICC Cricket World Cup 2019 match. Imran Tahir got 2 wickets while Andile Phehlukwayo and Aiden Markram got the 1-1 wicket. Pakistan scored 308/7 in 50 overs.

South Africa lost his 1st wicket in very 2nd over of the inning. That was the wicket of Hasim Amla. South Africa did a great partnership of 87 runs for the 2nd wicket. But lost the wickets at regular intervals after the break of that partnership.

Probability of Pak to qualify.

There is a little chance for Pakistan to qualify for the semi-final of ICC Cricket World Cup 2019.

Pakistan is at the 7th position below Bangladesh on the points table. Pakistan has 5 points after 6 matches.

Pakistan has to play with New Zealand, Afghanistan, and Bangladesh.

So Pakistan can get a maximum of 6 more points. On the other hands, England will have to play with India, Australia, and New Zealand.

England is at 4th position with 8 points after 6 matches.

Probability of Pak to qualify will depend upon their own performance and the performance of England, Bangladesh, and Sri Lanka.

Pakistan has won the match against England and South Africa but lost against India, Australia, and West Indies.

So Pakistan will have won their all 3 matches to increase the probability to qualify for the semi-final of ICC Cricket World Cup 2019.