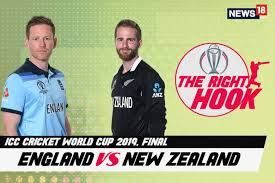 Hi, friends, I’m Gyan Ranjan. Know about the journey of England and New Zealand to the final of ICC Cricket World Cup 2019. Get live cricket score, full scorecard and World Cup 2019 Eng vs NZ highlights. The winner was decided on the basis of no. of boundaries of a team because of super over also tied.

New Zealand entered into the semi-final of world cup 2019 with 11 points in 4th position. This team has had won 5 lost 3, and one match canceled due to rain. New Zealand has won the semi-final against India by 18 runs. India was in the 1st position with 15 points. Ravindra Jadeja played amazing inning but he couldn’t achieve India to the final of CWC 2019. India lost that match due to the failure of the top order batsmen Virat Kohli, Rohit Sharma, KL Rahul, and Dinesh Kartik. Rohit Sharma made amazing world records in World Cup 2019 but failed to achieve India into the final. New Zealand entered into Cricket World Cup 2019 final by winning Ind vs NZ 1st semi-final WC 19.

England could score 241/9 in 50 overs. So the match has gone to the super-over of world cup 2019. Ben Stokes 84 and Jos Buttler played the great inning of 59 runs. Lockie Ferguson and James Neesham got the 3-3 wickets in this world cup 2019 final Eng vs NZ match.

Ben Stokes and Jos Buttler started the inning of super-over for England. England scored 15 runs with the help of 2 boundaries in super-over.

Martin Guptill and James Neesham started the inning of Super-over for New Zealand. Neesham smashed a six on the 2nd delivery of the over. New Zealand also scored 15 runs in super-over. So super-over also tied.