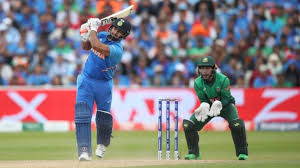 India qualified for the semi-final of ICC Cricket World Cup 2019.

India had lost a match against England on this Ground.

India was at 2nd position with 11 points after 7 matches on the points table world cup 2019.

While Bangladesh has earned 7 points in 7 matches. So this Ind vs Ban world cup 2019 was a must-win match for Bangladesh. But it couldn’t be possible

India has had won the matches against Australia, Pakistan, South Africa, West Indies, and Afghanistan before this match. The match against New Zealand had canceled due to rain.

Bangladesh has had won the matches against West Indies, South Africa, and Afghanistan. But lost this Ind vs Ban World Cup 2019 by 28 runs.
Bangladesh also lost the chance to qualify for the semi-final of
ICC Cricket World Cup 2019.

India won the toss and decided to bat first

Rohit Sharma and KL Rahul started the inning for India. They did a great partnership 180 runs for the 1st wicket. Rohit Sharma scored 104 runs. He smashed 7 boundaries and 5 sixes in his 4th century of ICC Cricket World 2019.

KL Rahul well contributed with 77 runs. Rishabh Panth missed his 1st World Cup half-century by only 2 runs. He smashed 6 boundaries and a six in his inning of 48 runs. MS Dhoni 35 and Virat Kohli supported with 26 runs.

Bangladesh had to chase a big total. But all-out at 286 runs in 48 overs. Shakib Al Hasan(66), and Mohammad Saifuddin(51*) played the great innings for Bangladesh.

Bangladesh all-out at 286 runs. India won this match by 28 runs and qualified for the semi-final of ICC Cricket World Cup 2019.

Rohit Sharma 104 runs in this match. It was his 4th century in ICC Cricket World Cup 2019.

He becomes the 1st Indian batsman who did 4 centuries in Cricket World Cup.

Before him, Sourav Ganguli was the man who had scored 3 centuries in a cricket world cup.

Rohit Sharma also leveled the record of Sangkara from Sri Lanka who had scored 4 centuries in a cricket world cup.

Shakib Al Hasan is at 2nd position with 542 runs.

He becomes the player of this match.