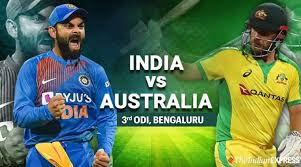 Australia won the toss and decided to bat first.

Australia did 1 change in playing XI for this India vs Australia 3rd ODI. Hazelwood added in playing XI in place of Richardson. Australia 2 valuable wickets of top-order batsmen in 1st powerplay at only 46 runs. Devid Warner(3) lost his wicket in 4th over while Aaron Finch(19) lost his wicket in 9th over. Australia scored 286/9 in 50 overs. Steven Smith played an amazing inning of 131 runs for Australia. Marcus Labuschagne 54 and Alex Carey supported with 35 runs to reach this total. Mohammad Shami got 4 wickets in this India vs Australia 3rd ODI cricket match. Ravindra Jadeja got 2 while Navdeep Saini and Kuldeep Yadav got the 1-1 wicket.

Unfortunately India’s opener batsman Shikhar Dhawan injured during fielding. So KL Rahul and Rohit Sharma played the role of opener for India. KL Rahul could contribute with only 19 runs and lost his wicket in 13th over when the total score of India was 69 runs. But Rohit Sharma played one of the best innings of his ODI career. He smashed 8 boundaries and 6 sixes in his inning of 119 runs. Virat Kohli also played a great inning of 89 runs. He becomes the highest scorer captain of India with 11208 runs. He breaks the record of MS Dhoni of 11207 runs. Shreyas Iyer well supported with 44 runs in reaching the winning target of 287 runs. He smashed 6 boundaries and 1 six in his inning. India scored 289/3 in 47.3 overs and won this India vs Australia 3rd ODI the final cricket match of Australia tour of India ODI series by 7 wickets. Hazlewood, Agar, and Zampa got the 1-1 wicket for Australia. But Australian bowlers couldn’t restrict India to get the winning target. India not only won this Ind vs Aus 3rd ODI but also Australia tour of India ODI series 2020 by 2-1. It was the 2nd consecutive series win for India in 2020. The 1st series win was the Sri Lanka tour of India T20 series.

India lost the 1st ODI by 10 wickets. Team India was looking so weak in that match. But India did great return in the 2nd ODI and won that cricket match by 36 runs. So Ind vs Aus 3rd ODI became a series decider match. India won the 3rd ODI by 7 wickets and Australia tour of India ODI series by 2-1. India also ends the year 2019 with a series win against West Indies. Virat Kohli becomes the highest scorer captain of India with 11208 runs in all formats.