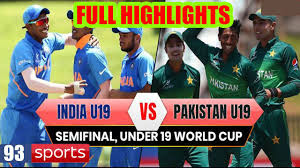 Pakistan decided to bat first after winning the toss. The U19 cricket team of Pakistan all-out at 172 runs in 43.1 overs in this Ind vs Pak U19 CWC semi-final. Only Haider Ali(56) and captain Rohail Nazir(62) could do better for Pakistan. Mohammad Haris was the 3rd Pakistani batsman who scored runs in double-figure. He was only the batsman who smashed a six for Pakistan in his inning of 21 runs. Sushant Misra got 3 wickets in this Ind vs Pak U19 Cricket World Cup semi-final 2020.

Yashaswi Jaiswal and Saxena started the inning for the Indian U19 cricket team in the semi-final of U19 CWC 2020. Both the players played amazingly innings. India got the winning target without losing any wicket. Yashaswi Jaiswal smashed the winning shot which was a six. It was not only a winning shot but also a century achieving shot for him. It was the 1st U19 ODI century of Yashaswi Jaiswal. India won this Ind vs Pak U19 CWC 2020 by 10 wickets. On the other hand, India’s national cricket team whitewashed New Zealand in India tour of New Zealand T20 series 2020 by 5-0.