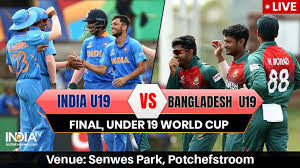 Hi friends, I’m Gyan Ranjan. Watch Ind vs Ban U 19 world cup live. Know about team squads and playing 11 of Ind vs Ban U19 final. You can watch the live score and highlights of the India vs Ban U19 World Cup 2020 final.

Bangladesh won the toss and elected to bowl first. India lost the 1st wicket in the 7th over when the score was only 9 runs. It was the wicket of Divyansh Saxena who could score only 2 runs. Yashashwi Jaiswal played again a great inning of 88 runs. He smashed 8 boundaries and a six in his inning. It was his 4th half-century in this ICC U19 Cricket World Cup 2020. India all-out in 47.2 overs at 177 runs. Tilak Varma 38 and DC Jurel supported with 18 runs. Abhisekh Das got 3 wickets while Shoriful Islam and Shakib got the 2-2 wickets. Rakibul Hasan got 1 wicket in this India vs Ban U19 World Cup final 2020.

Bangladesh won this match by 3 wickets by Duckworth Lewis Method. Ravi Bishnoi 4, Shushant 2, and Yashashwi Jaiswal got 1 wicket. But Indian U19 bowlers failed to restrict Bangladesh under the winning target. Bangladesh scored 170/7 in 42.1 overs. Akbar Ali 43, Md Parvez Hossain 25, and Tenzin Hasan supported with 17 runs to got Bangladesh the trophy of ICC U19 Cricket World Cup 2020.

Yahashwi Jaiswal becomes the player of the tournament. He has scored more than 4 hundred runs in this tournament.